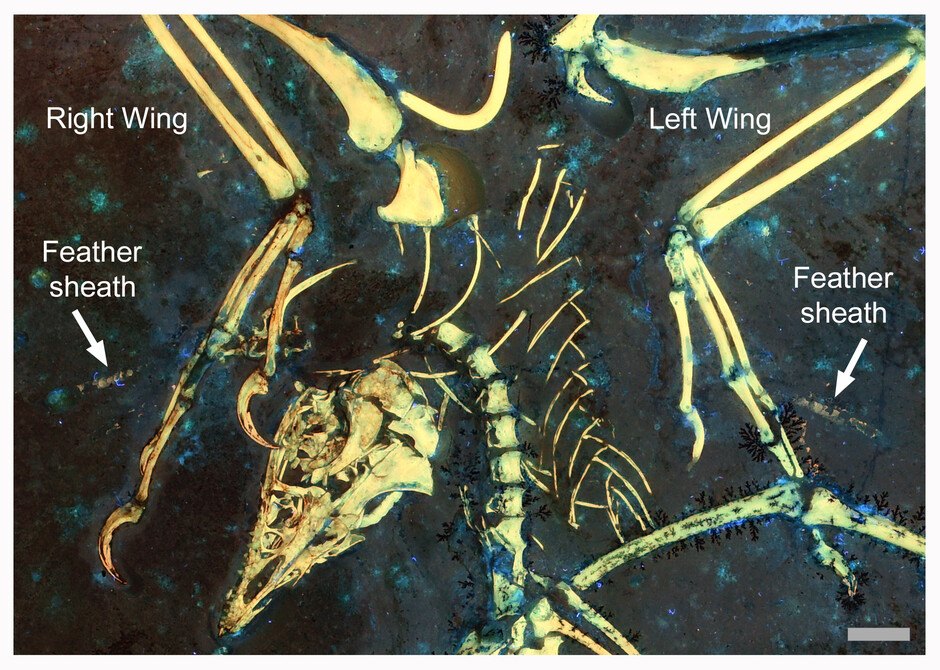 Flying birds moult their feathers when they are old and worn because they inhibit flight performance, and the moult strategy is typically a sequential molt. Moulting is thought to be unorganised in the first feathered dinosaurs because they had yet to evolve flight, so determining how moulting evolved can lead to better understanding of flight origins.

However, evidence of the transition to modern moulting strategies is scarce in the fossil record. Recently, Research Assistant Professor Dr Michael PITTMAN from Faculty of Science of The University of Hong Kong (HKU) (Research Division for Earth and Planetary Science, as well as Vertebrate Palaeontology Laboratory), Thomas G KAYE of the Foundation for Scientific Advancement (Arizona, USA) and William R WAHL of the Wyoming Dinosaur Center (Wyoming, USA), jointly discovered the earliest record of feather moulting from the famous early fossil bird Archaeopteryx found in southern Germany in rocks that used to be tropical lagoons ~150 million years ago. The findings were published in in Communications Biology.

The most common moult strategy in modern birds is a sequential moult, where feathers are lost from both wings at the same time in a symmetrical pattern. The sequence of feather loss follows two different strategies: The first strategy is a numerically sequential molt where feathers are lost in numerical order and is the most common among passerines birds, also known as songbirds and perching birds; the second strategy is a centre-out strategy where a centre feather is lost first, and then subsequent feathers are shed outwards from this centre point; this is more common in non-passerine birds such as falcons. This strategy minimises the size of the aerodynamic hole in the wing, which allows falcons to better maintain their flight performance during the moult for hunting.

Laser-Stimulated Fluorescence imaging co-developed at HKU revealed feather sheaths on the Thermopolis specimen of Archaeopteryx that are otherwise invisible under white light. “We found feather sheaths mirrored on both wings. These sheaths are separated by one feather and are not in numerical sequential order. This indicates that Archaeopteryx used a sequential centre-out moulting strategy, which is used in living falcons to preserve maximum flight performance,” says Kaye. This strategy was therefore already present at the earliest origins of flight. “The centre-out moulting strategy existed in early flyers and would have been a very welcome benefit because of their otherwise poor flight capabilities. They would have appreciated any flight advantage they could obtain,” says Pittman. “This discovery provides important insights into how and when birds refined their early flight capabilities before the appearance of iconic but later flight-related adaptations like a keeled breastbone (sternum), fused tail tip (pygostyle) and the triosseal canal of the shoulder,” added Pittman. This study is part of a larger long-term project by Pittman and Kaye and their team of collaborators to better understand the origins of flight (see notes).

Video summary of the research: https://youtu.be/fG2acifAuAo

The Thermopolis specimen of Archaeopteryx. This famous early fossil bird is on display at the Wyoming Dinosaur Center in Wyoming, USA. Image credit: Kaye et al. 2020.