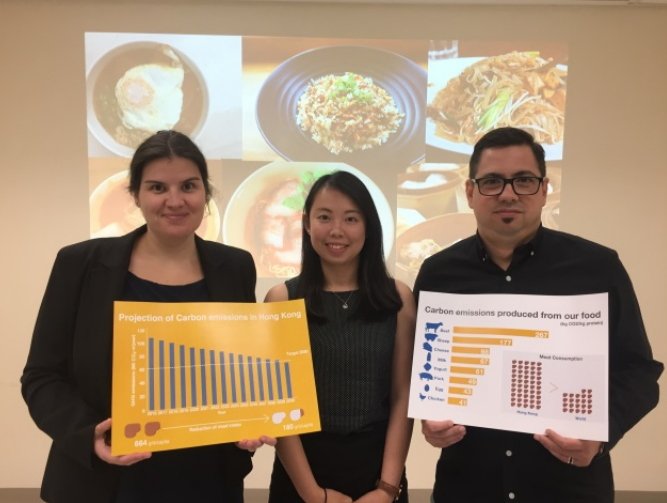 A research team from the the Department of Earth Sciences found that Hong Kong’s excessive appetite for meat is the main culprit to its high greenhouse gas emission per capita. The results of the study show that if citizens of Hong Kong adopt the governmental nutrient guidelines on meat consumption, Hong Kong would achieve a 43% reduction in greenhouse gas emissions. Thus, simply by adopting a healthier diet, Hong Kong population can actually have a very important role in reducing greenhouse gas emission to the level required to reach the Paris agreement objective.

This research was led by Yvonne Yau, Environmental Science fresh graduate in her undergraduate research project supervised by Dr Christelle Not from the Department of Earth Sciences. It was published in Environmental Research Letters in collaboration with Dr Benoit Thibodeau from the same Department.

Under the Paris Agreement, Hong Kong aims to reduce 26%-36% of the city’s absolute carbon emissions relative to 2005 levels by 2030. To assess its carbon emission the government uses the traditional “production-based accounting” method which only calculates the emissions produced within the geographic boundary such as energy production, agriculture and transportation, and neglect the consumption of imported goods. Statistics from the Hong Kong government shows that carbon emission in Hong Kong is around 41.6 megatonnes (Mt) carbon dioxide equivalent (CO2-e) in 2015, which is fairly low. However, according to a study that used another calculation method (i.e., consumption-based accounting) that takes into account emissions resulting from actual consumption of its citizens, Hong Kong was found to be the seventh highest emitters per capita when comparing consumption emissions among 113 regions. The research from HKU also used this alternative calculation method to estimate Hong Kong’s carbon emissions to be 109Mt CO2-e, more than double that of the government’s estimation. Emissions in international imports contributed to 62% of the total emissions, which mainly comes from meat and dairy products consumption (57.5 Mt CO2-e).

Countries like the UK have started reporting “consumption-based” carbon emissions. Apart from the direct emissions from local production, carbon emissions associated in imported goods which are consumed by local citizens such as food, clothing and household goods are also included in the calculation. In other words, “consumption-based accounting” captures the direct and indirect emissions of goods along the life cycle from raw material, production, manufacturing, transport to retail, with the aim to encourage cities dominated by consumer trade to assume the responsibility and obligations of reducing carbon emission.

Using meat as an example, Hong Kong only calculates the emissions from on-farm energy use, machine and animal in local farms. On the other hand, “consumption-based accounting” includes the carbon emissions from all related livestock activities which occurs outside Hong Kong. Greenhouse gas emissions that are emitted during land use change, feed crops cultivation, manufacturing of fertilizers and pesticides, manure management, on-farm energy use, rearing livestock, transportation, manufacturing etc are all included.

The HKU research shows that Hong Kong has one of the highest meat consumptions per capita in the world at 664g/day/capita (equivalent to two pieces of 10-oz steak). Pork and beef consumption are the highest, with average daily consumption four times higher than the UK.

According to the Food and Agriculture Organization of the United Nations (FAO), the livestock sector accounts for 18% of the global anthropogenic greenhouse gas emissions, and is the main culprit of greenhouse effect. The situation is worse in the cattle rearing industry, In the rearing process, cow produces methane, a greenhouse gas much more potent than carbon dioxide, during digestion. Consuming a piece of 10-oz steak is equivalent to emitting around 20 kg of CO2.

The research team believes that Hong Kong could significantly reduce carbon emission and achieve the 2030 emission target if citizens are willing to switch to a healthier diet with less meat. According to the guidelines from the Hong Kong Department of Health, an average adult is recommended to take in no more than 180g of meat, fish and egg, per day which is equivalent to a piece of 6-oz steak.

If Hong Kong citizens lower meat consumption to the dietary guidelines, livestock-related emissions in Hong Kong can be reduced by 67%. Other countries such as Sweden and the Netherlands have incorporated carbon emission reference figures in food nutritional guidelines, encouraging citizens to choose low carbon footprint food and reduce meat intake in order to reduce global carbon emission.

“Hong Kong does not have energy-intense industry and local emissions are relatively low. The Hong Kong government should consider the adoption of consumption emission as a standard to set climatic targets and policy. We should not evade the global responsibility of carbon emission.” said Yvonne Yau, currently a Research Assistant in HKU. She believes that if the public are more aware of carbon emissions from food, they are more likely to reduce meat consumption or choose meat with lower carbon footprint and thus help to reduce global greenhouse gas emissions.

“This study is crucial to highlight the importance of our consumption choices. It is very inspiring to see students like Yvonne tackling a global problem and coming up with a real, easily applicable solution that will have a direct impact on both health and climate,” said Dr Not.

More on the Environmental Geochemistry and Oceanography research group led by Dr Christelle Not and Dr Benoit Thibodeau: http://web.hku.hk/~bthib/ 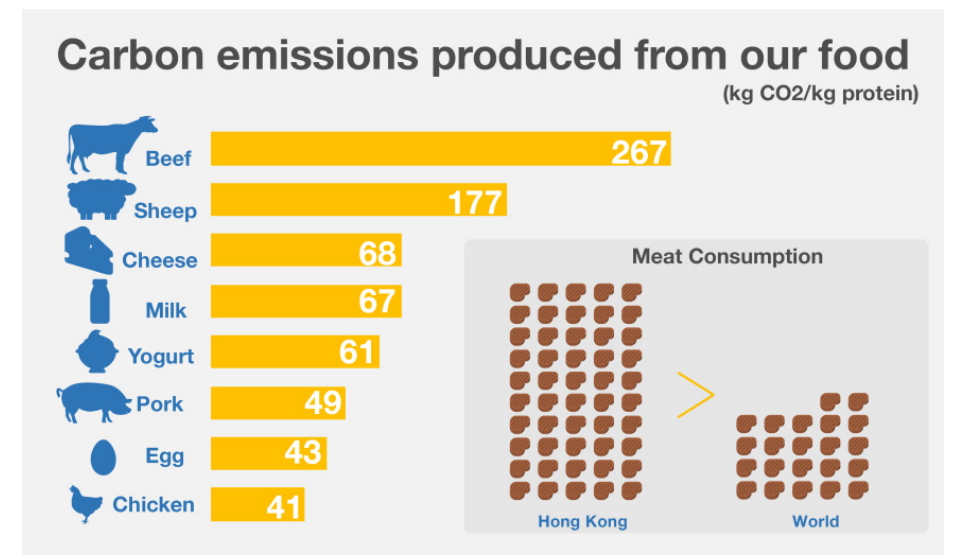 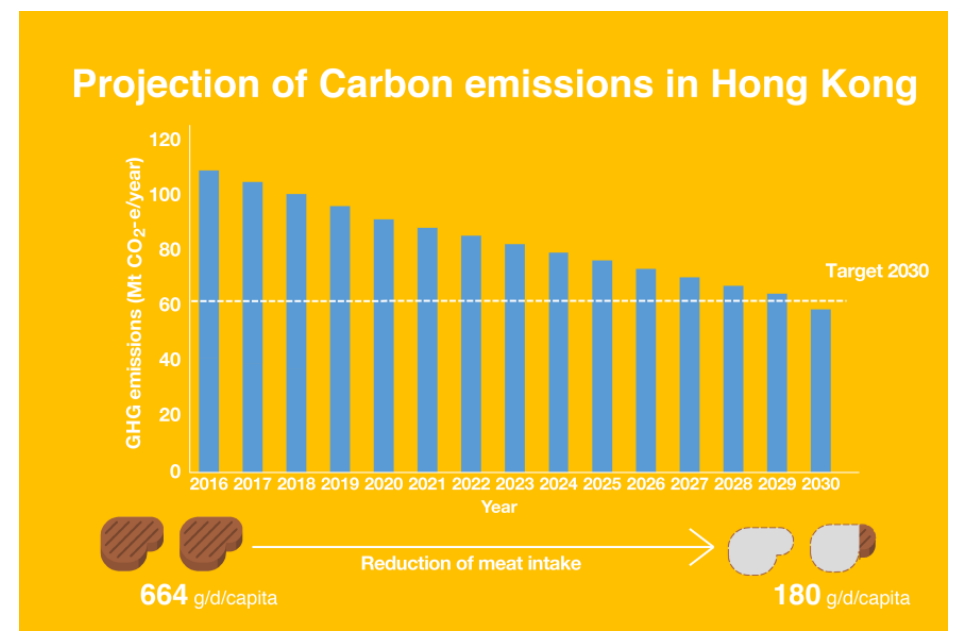 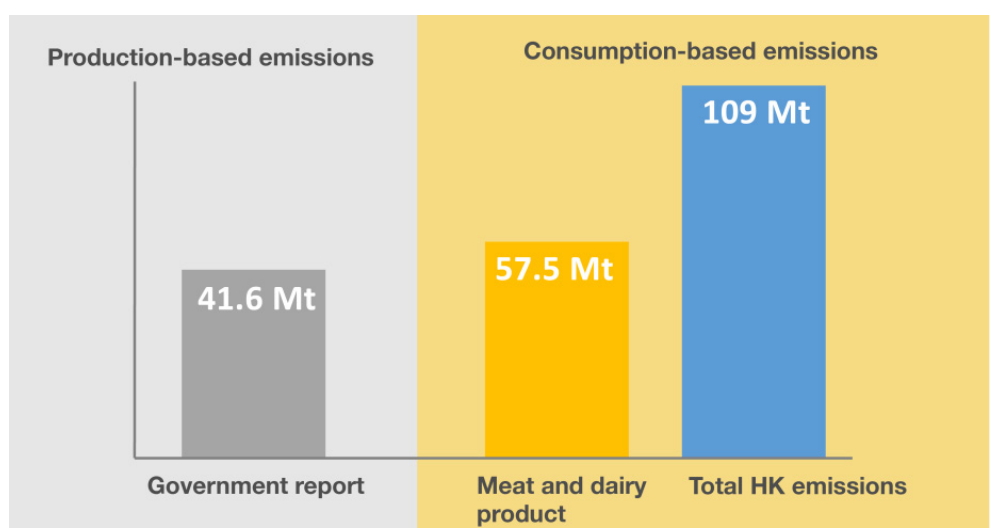 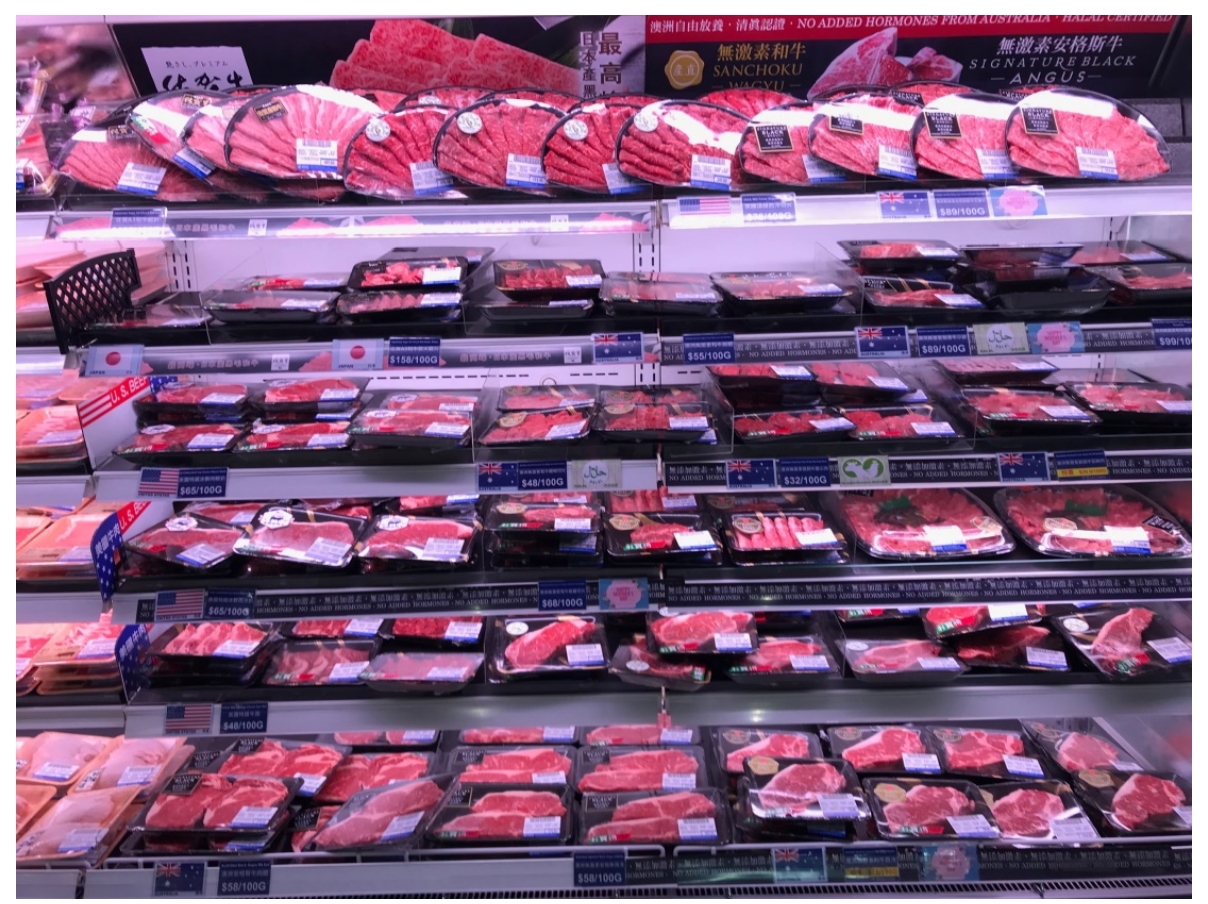