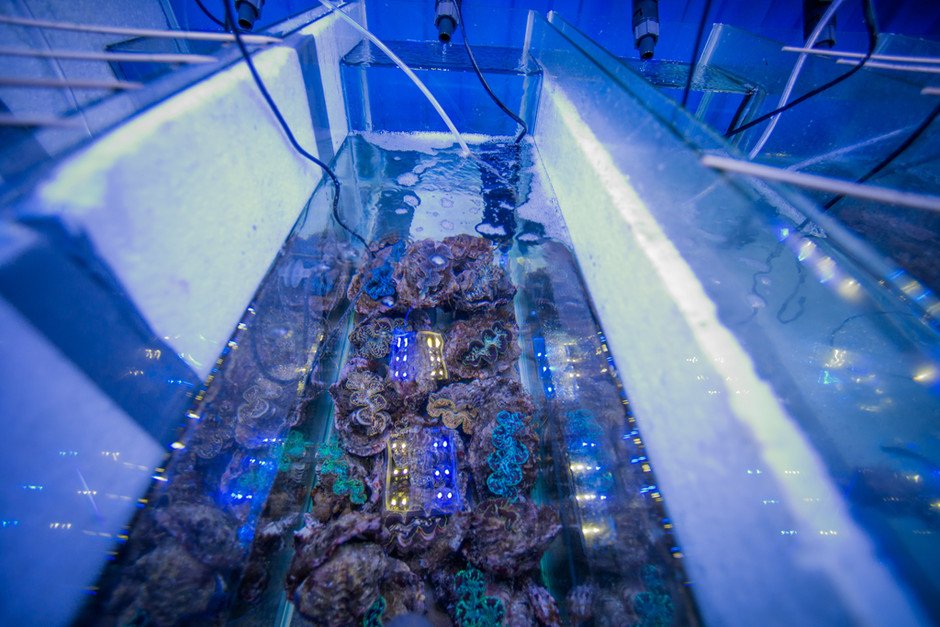 New research conducted at CRIOBE and ENTROPIE research units, with the collaboration of the Swire institute of Marine Science of The University of Hong Kong, The Cawthron Institute and James Cook University, highlights the impacts of benthic species assemblages on the giant clams Tridacna maxima. The findings were recently published in the journal Microbiome.

The researchers explored for the first time the influence of benthic species-assemblages on giant clams health, with or without increasing temperature. To do so, they created artificial benthic assemblages using two coral species (Pocillopora damicornis and Acropora cytherea) and one giant clam species (Tridacna maxima). The results showed that the health status of giant clams depended on the neighbouring species. Moreover, using cutting-edge DNA multiplexing-metabarcoding technology adapted by Dr. Xavier Pochon, the team studied the microbial community of the giant clams. The researchers newly discovered distinct microbiotypes (group of specific bacteria) in the studied T. maxima population, one of which was linked to clam mortality.

Giant clams are less studied by scientists, yet they are important members of coral reefs and play numerous ecological roles. They are the largest living bivalves and serve as food for fish and human. Like coral, they contribute to primary production through photosynthesis by hosting unicellular algae. They also host a large community of bacteria as well as animals such as shrimps or crabs. However, all of the 12 currently recognised species are under threat and more than 50% of the wild population are either locally extinct or severely depleted.

“For decades we have been focusing on the effect of climate change on single species but this doesn’t reflect what could happen within coral reef as a whole. This is why we decided to explore the effect of neighbouring species on the giant clam. We were extremely surprised to discover that the presence of some corals, particularly Acropora cytherea, led to an acute sensitivity of giant clams to increasing temperature which therefore exhibited a high death rate.” explains Dr. Isis Guibert.

Microbiomes are an integral part of multicellular organisms, contributing to their health and physiological performance. The scientists noted that despite a surge of interest in this research focus, very few invertebrate microbiomes have been studied. The microbiome of giant clams is particularly interesting because clams are exposed to an extreme abundance and diversity of microbes through filter feeding. The discovery of specific microbiome structure, detectable from the genus level, is the first description of microbiotypes in invertebrates. “The results of our study suggest that, similarly to humans, genetic factors might drive the microbiotype of a giant clam.” said Dr. Isis Guibert.

Interestingly, the clams with compromised health were characterised by a prominence of vibrio and therefore a distinct microbiome. “The relative proportion of Vibrionaceae could be used as an early indicator of clam health in natural populations.” explains Dr.Véronique Berteaux-Lecellier, who supervised the study, “We hypothesise that A. cytherea could secrete metabolites that might have weakened the clams’ defenses against Vibrio infection; future research should explore this possibility.” The findings of this study suggest that the composition of the coral reef benthos, together with increasing water temperatures, could negatively impact the health of giant clams and potentially other reef organisms. Therefore, the findings support the idea that, like terrestrial conservation and restoration, taking account of the entire benthic assemblages should be the goal of marine conservation strategies.

Short link to the article:https://rdcu.be/b3HJO