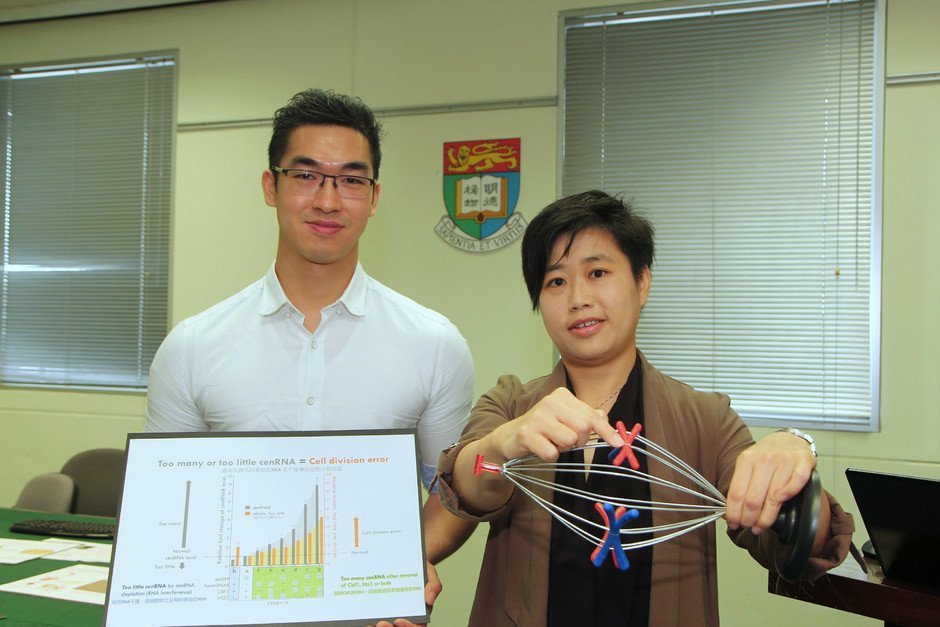 Our genetic code is stored in chromosomes that are composed of DNA (deoxyribonucleic acid). To make sure the genetic code is maintained accurately in all the cells, our cells must replicate precisely and distribute its chromosomes equally to its two daughter cells during every cell cycle. Errors in chromosome separation result in cells with an abnormal number of chromosomes, which may cause spontaneous abortion, genetic diseases or cancers. One chromosomal element that is important for proper chromosome segregation is the centromere, a unique region of DNA on the chromosome that directs chromosome movement during cell division.

Dr Karen Wing Yee Yuen and Dr Yick Hin Ling, Assistant Professor and and Postdoctoral Fellow respectively from the School of Biological Sciences, discovered that centromeric DNA is used as a template to produce a non-protein coding, centromeric RNA (ribonucleic acid), that is essential for chromosome stability. If there is too much or too little centromeric RNA (cenRNA), the centromere will be defective and chromosomes will be lost. The findings were recently published in one of the top multidisciplinary journals, Proceedings of the National Academy of Sciences of the United States of America (PNAS) (link). This research article is recommended by F1000Prime, whose members selected approximately the top 2% of all published articles in the biology and medical sciences each year, and the recommended Faculty commented that this PNAS article is of special significance and an emerging frontier in the centromere biology field.

The DNA of our chromosomes codes for about 20,000 proteins. When the cell needs to produce a particular protein, such as insulin, the segment of DNA molecule coding for insulin, known as a gene, is first used as a template to copy into a RNA molecule. That RNA then serves as a recipe for directing the cells to make the specific protein. However, only 2% of our DNA is protein-coding. Yet, another 70% of our DNA is still copied into RNAs, which are not recipes to make proteins. Those are called non-coding RNA. These non-coding RNAs are once considered as “junk”. In recent years, however, researches have revealed vital roles of non-coding RNA, such as in gene regulation and maintaining chromosome structure.

Dr Karen Yuen, who leads HKU’s Chromosome Biology Laboratory in the School of Biological Sciences, said, “Our current study is performed in single-cell organism, the baker’s yeast, but non-coding RNA copied from the DNA of the centromere is also found in multicellular organisms such as humans, mice and flies, suggesting that centromeric RNA (cenRNA) is a fundamentally important molecule that is commonly used by nature to control cell division.”

Dr Yuen added, “Our lab often uses simple model organisms, including the soil-living microscopic roundworm and single-cell baker’s yeast, which we also use for baking bread and making beer, to understand basic, important cellular processes. The mechanism of cell division is strikingly similar in many forms of life. These little organisms allow us to do experiments that are difficult to perform in humans or mammalian cells. Many applied, clinical researches began by studying the cellular processes in these model organisms. Important cell biology researches using yeast have been awarded Nobel Prize in Physiology or Medicine recently in 2013 and 2016.”

The first author of the work, a former PhD student and current Postdoctoral Fellow Dr Yick Hin Ling from Dr Yuen’s lab, said, “Recent research shows abnormally high expression of centromeric RNA in some cancers like ovarian cancers. Mis-regulation of cenRNA in the cell might contribute to cancer progression. Further study is required to test this.” For disease diagnosis and therapies, Dr Ling said, “We will try to see if cenRNA could be used as a cancer biomarker. If the cancer cells release a high level of cenRNA to the blood, it could be used for early detection or for monitoring the malignancy of the tumor.”

Centromere, a specialized region of DNA on the chromosome, directs chromosome movement during cell division. Courtesy of Jasmine Lau, an undergraduate student helper in Yuen’s Lab.