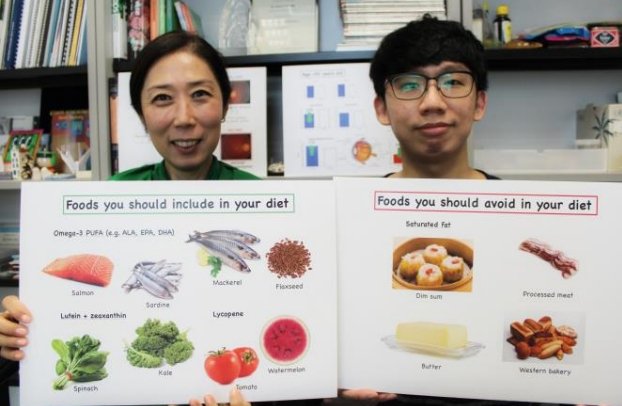 Age-related macular degeneration (AMD) is one of the most common causes of vision impairment among the elderly in Hong Kong. The major symptom involves the gradual blurring of central sight, triggered by the multifactorial degeneration of retinal cells. As the disease progresses, certain patients with atrophic AMD (dry-form) might develop macular neovascularization (wet-form), causing rapid loss of vision. Unfortunately, the incidence of neovascular AMD is higher in Hong Kong population due to heredity. Although neovascularization can currently be controlled by anti-VEGF injections, effective preventive measures are still lacking.

Assistant Professor Dr Jetty Chung-Yung Lee and graduate researcher Andy Ho-Hang Leung from the School of Biological Sciences, and Honorary Associate Professor Dr Ian Y H Wong and Honorary Assistant Professor Dr Alex L K Ng from Department of Ophthalmology, HKU, discovered in an observational study that the representative Hong Kong population was deficient in fatty fish (omega-3 fatty acid) and dark green vegetables (carotenoids) and had excessive red meat (omega-6 fatty acid) in the diet, which increased the risk of developing AMD. The poor dietary habits were also associated with the generation of fatty acid oxygenated products via free radicals/ROS, which promoted inflammation and further increased the risk factors for AMD development. It is the first of such research in Asia.

This case-control study enrolled 99 patients with neovascular AMD and 198 age-and-gender-matched healthy control. Plasma samples were obtained from these volunteers and their biochemical contents (carotenoids, fatty acids and their oxidation products) were determined. A food frequency questionnaire was also collected to evaluate the dietary pattern of the subjects and correlated with the plasma analysis. The group found the average consumption rate of deep-sea fish was less than twice per week, which is inadequate to obtain the multiple health effects of omega-3 fatty acids. To the best of our knowledge, this is the first study to show that by choosing the correct omega-fatty acids in the diet, the risk and progression of AMD caused by free radicals/ROS in the ageing population can be substantially reduced. Regular intake of high omega-3 fatty acids food such as salmon and flaxseed with rich carotenoid foods like spinach, kale and tomatoes is thus recommended for AMD prevention. Moreover, by assessing the severity of in vivo omegafatty acid oxidation, we can characterize dietary habits of AMD subjects.

‘Simple change in omega diet can keep your eyes healthy’—we all could achieve a healthy life through adjusting dietary habits.

This research is supported by Health and Medical Research Fund from Food and Health Bureau, HKSAR. The findings were recently published in Free Radical Biology and Medicine (FRBM), approximately one of the top 6% journals for physiology medicine.

Link of the paper