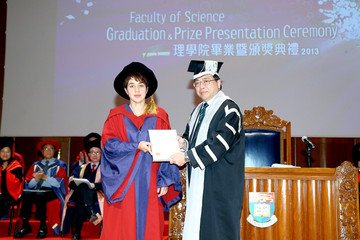 Professor Djurišić received the Faculty of Science Award for Teaching Excellence 2012-13, for her outstanding teaching performance and the continuous efforts he has put in arousing students’ learning interests.

Professor Djurišić has actively participated in curriculum development and served in the Curriculum Development Committee of the Department of Physics in the period 2004-2008. She has developed 8 new courses since joining the Department of Physics, including two Common Core courses. She is actively engaged in the implementation of new pedagogies and in particular improving the laboratory teaching. In the past she has obtained Run Run Shaw Research and Teaching Endowment Fund grant for the development of experimental setups for renewable energy related laboratory experiments suitable for non-science students, as well as high school science projects.

Professor Djurišić obtained her PhD degree in Electrical Engineering from the School of Electrical Engineering, The University of Belgrade in 1997. After finishing her PhD studies, she worked as a postdoctoral fellow at The University of Hong Kong and as an Alexander von Humboldt postdoctoral fellow at TU Dresden. She joined the Department. of Physics at HKU in 2003 and is currently a Professor of Physics. Her research interests include the optical properties of materials, nanomaterials, photocatalysis, wide-bandgap semiconductors and optoelectronic devices, such as light emitting diodes and solar cells. She has published over 230 research papers, which have been cited over 6,900 times.