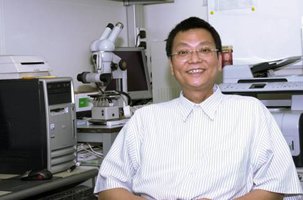 Professor Wong obtained his BSc and MPhil degrees at The University of Hong Kong and moved to Canada for his PhD training in the University of Alberta. After his postdoctoral training at the University of Toronto, he joined The University of Hong Kong as an Assistant Professor in 1996 and promoted to Associate Professor and Professor in 2003 and 2009 respectively. During his appointment at The University, he also served as the adjunct researcher (2000) in National Institute of Child Health & Development (NIH, USA), guest professor (2002-04) in the GuangDong Dayabay Fishery Development Center (Oceanic & Aquatic Product Department, Guangdong Province), and visiting professor (2002-05, 2006-09) in the School of Life Sciences, Zhongshan University (Guangzhou). For his teaching duties in the School of Biological Sciences, he is in charge of the courses on animal physiology, biotechnology, reproduction and developmental biology. In 2002, he received the "Honourable Mention Award" by the Academic Council (HKU) for his organization of a "One-Day Symposium for Selected Topics of Animal Physiology", which was the first of its kind among the biology departments using a symposium format for undergraduate teaching. In terms of Research, Professor Wong is a comparative endocrinologist by training and his works focus on endocrine regulation & signal transduction mechanisms for growth hormone release & synthesis in fish models. He is currently serving on the editorial board of "The Open Physiology Journal" and as a special editor for the journal "General & Comparative Endocrinology".

"薪火相傳，教學相長…"
"The torch will be passed onto the young people. During the process, both the teacher and students will be much enriched."