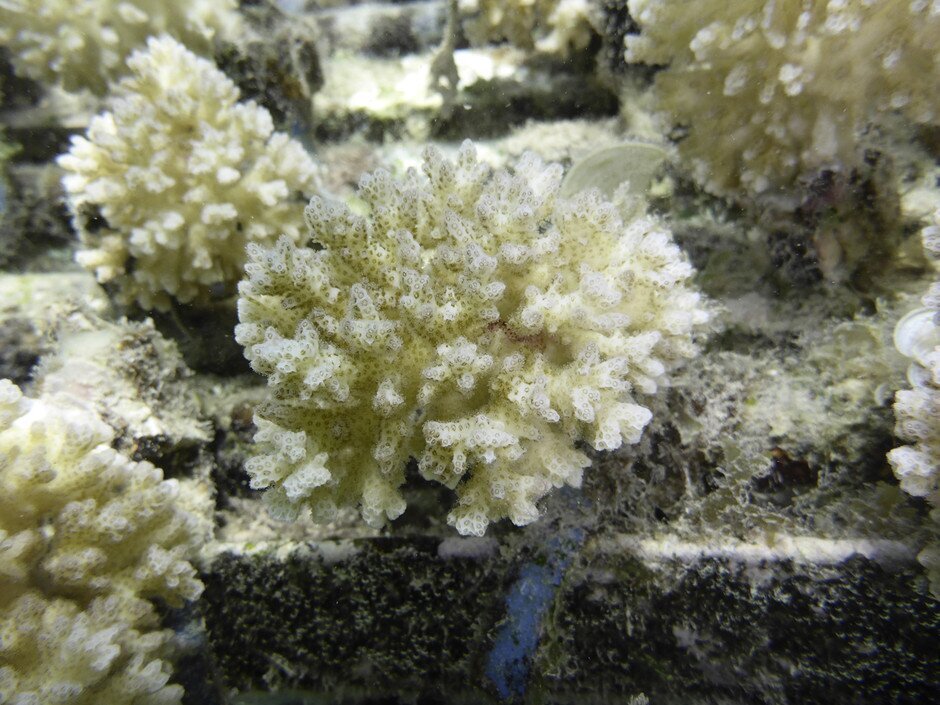 New research highlights the effect of benthic assemblages on the sulfur metabolism of coral and giant clam species. The research was conducted at CRIOBE and ENTROPIE research units, with the collaboration of the Swire institute of Marine Science of The University of Hong Kong (SWIMS, HKU), Paris-Saclay UVSQ University, The Cawthron Institute (New Zealand) and The University of French Polynesia. The findings were recently published in the journal Scientific Reports.

To better understand how benthic species assemblages could influence their respective fitness, the researchers created artificial benthic assemblages using two coral species (Pocillopora damicornis and Acropora cytherea) and one giant clam species (Tridacna maxima) and measured the dimethylsulfoniopropionate (DMSP) concentration in each species using Nuclear Magnetic Resonance (NMR) spectroscopy. DMSP, produced in large quantities in coral reefs, is a key compound that plays a central role in the marine sulfur cycle and climate regulation as major precursor of the volatile compound Dimethylsulfide (DMS). While DMSP has been found in terrestrial and marine organisms, only few species are able to produce it, among them marine algae such as dinoflagellates and corals. Numerous ecological studies have focused on DMSP concentrations in corals, which led to the hypothesis that increases in DMSP levels might be a general response to stress.

“We submitted our different assemblages of one, two or three co-occurring species to a thermal stress and measured the DMSP concentration in each species. Interestingly, we demonstrated that the concentration of DMSP in A. cytherea and T. maxima is modulated according to the complexity of species assemblages”, explains Dr Isis Guibert.

Coral and giant clams are holobionts living in association with symbiotic algae, Symbiodiniaceae, as well as a large bacterial community. Both, Symbiodiniaceae and bacteria are able to produce DMSP. To determine whether giant clams might also contribute to DMSP production, the team explored transcriptomes of T. maxima for genes encoding enzymes involved in the DMSP biosynthesis. “For the first time, we revealed the existence of homologous genes involved in DMSP production in giant clam genome” said Dr Gaël Lecellier, who supervised the study. “Taken together, our results suggest that DMSP concentration in the holobiont is influenced by their neighboring species, modifying the metabolism of the sulfur pathway”. The findings of this study offer new perspectives for future global sulfur cycling research.

About the research team
Dr Isis Guibert is a postdoctoral researcher in the Division of Ecology & Biodiversity and Swire Institute of Marine Science at HKU. She spearheaded the work as part of her PhD at Sorbonne University, in the CRIOBE and ENTROPIE research units. Flavien Bourdreuxis a chemistry engineer at Paris-Saclay UVSQ University. Dr Isabelle Bonnard is a professor associate at Perpignan University at CRIOBE. Dr Xavier Pochon is a science leader at the Cawthron Institute and University of Auckland, New Zealand. Dr Vaimiti Dubousquet is a scientific and technological innovation officer at the Government of French Polynesia. Dr Raharivelomanana Phila is a professor at The University of French Polynesia. Dr Véronique Berteaux-Lecellier is a CNRS researcher at ENTROPIE research unit. Dr Gael Lecellier is an associate professor at Paris-Saclay UVSQ University at ENTROPIE research unit.