Professor Andy Hor, Vice President (Research) and Chair Professor of Metallic Chemistry & Materials at the University of Hong Kong (HKU), has been elected a fellow of the European Academy of Sciences (EurASc).

EurASc is a non-profit, non-governmental and independent organisation established in 2003 in Brussels, aiming to promote excellence in science and technology. It awards prestigious prizes including the Leonardo da Vinci Award and the Blaise Pascal Medal. It currently has about 600 fellows, over 10% of whom are Nobel Laureate and Fields Medalists from over 40 countries.

Professor Hor is honoured for his achievements and contributions to academia in the area of structural metallic chemistry. He specialises in the design, synthesis and structural analysis of novel molecules. His research lies at the fundamental of molecular science – to analyse the molecular composition and structure as a means to understand the properties and activities of a molecule or molecular materials, and from such knowledge, design new molecules, as well as develop new functions and applications.

“This is how new science can be developed, translated and eventually be applied as new technologies,” said Professor Hor, who is honoured and delighted to receive the award. Professor Hor refers to the simple doctrine which has guided his research – technology is most disruptive when its science is at its (creative) root and said: “This is also how international fellowship like that from the European Academy of Science and prestigious prizes like Nobel Prize and Fields medal are conferred.”

Over the years, his team has investigated a range of systems in coordination and organometallic complexes, hetero- and polynuclear aggregates and clusters, as well as metal-organic frameworks and molecular materials. These are molecular substances that form the basis of industrial chemicals, pharmaceutical catalysis as well as a range of energy and environmental applications. Recently, he has teamed up with scientists at the Agency of Science, Technology & Research (A*Star) of Singapore to study metal-air and metal-sulfide batteries as the next-generation of green batteries.

Professor Hor has published over 435 international papers with an average of 1,200 annual citations in 2017-8, filed several patents in battery materials and supervised over 100 PhD, MSc and other research students.

Biography of Professor Andy Hor
Professor Andy Hor is the Vice President and Pro-Vice-Chancellor (Research) and Chair Professor of Metallic Chemistry & Materials of the University of Hong Kong (HKU). He started his academic career at the National University of Singapore (NUS) in which he also served as Head of Chemistry and Vice Dean (Academic) of Science. He later served as the Executive Director of the Institute of Materials Research & Engineering of the Agency of Science, Technology & Research (A*Star) of Singapore for 5 years before joining HKU in September 2015. He is Fellow of the Singapore National of Chemistry, Singapore National Academy of Science, and Royal Society of Chemistry in the UK, and former President of the Singapore National Institute of Chemistry and Federation of Asian Chemical Societies. He has contributed significantly over four decades to the development of chemistry in Singapore, Asia and the world through his research programs and various community services and leadership in international conferences and academic journals, and won numerous teaching and research awards while in NUS and A*Star. 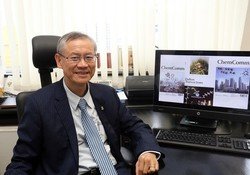