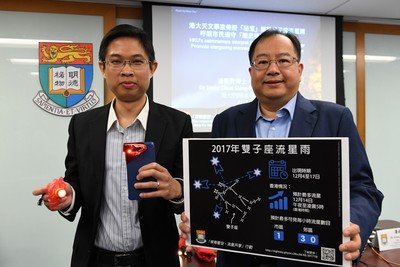 The meteor shower with the best observation conditions this year, the Geminid Meteor Shower, will occur from today to December 17. The observation conditions of the various meteor showers each year depend on a multitude of natural and artificial factors. HKU astronomers have determined that the best time to observe the Geminid Meteor Shower this year in the Hong Kong territory will be midnight to 5 am on December 14. There may be 20-30 meteors per hour if you’re watching at a dark rural location with a wide field-of-view during that period.

When the Earth sweeps past regions of meteoroids left behind from comets or asteroids, a meteor shower will appear as if it originates from a particular point (the radiant) in the sky. Dr Jason Pun Chun-shing, an astronomer in HKU Physics Department and the Principle Investigator of the Hong Kong Night Sky Brightness Monitoring Network explains: “The actual number of meteors observable in the night sky during any particular meteor shower is affected by many factors, including various natural factors such as the geographical location of the observing site and its light pollution condition, the activity of the shower, the peaking time of the meteor shower activities, the location of the radiant point in the sky, moon phase, the amount of cloud in the sky and the field-of-view of the observation location. At the same time, human factors including the observer’s eyesight and experience may also affect what can be seen. In terms of anthropogenic factors, the extent of light pollution in the observing location is of foremost importance in Hong Kong.”

Regarding the prediction that the Zenithal Hourly Rate (ZHR) for this year’s Geminid Meteor Shower being 120 per hour, Dr Pun explains that this figure is an ideal maximum, which assumes the observer has totally dark-adapted eyes, the radiant is directly up the zenith during the peak hour, and the observing site has an unobstructed field-of-view open without moonlight and light pollution. In fact, this assumed maximum will not realistically take place in Hong Kong. Part of the reason is that the peak activity of this Shower will occur during daytime in Hong Kong and the radiant of this shower is not along the zenith direction. Therefore even in a location with zero light pollution, the number of meteors observable in Hong Kong will only be around 70.

HKU astronomer and Project Manager of the Hong Kong Night Sky Brightness Monitoring Network, Dr So Chu-wing computes the number of meteors observable in Hong Kong based on the light pollution data collected from the Monitoring Network and the meteor shower model of NASA scientist Dr Peter Jenniskens. Based on the calculations, if local weather permits, the number of meteors observable from this Geminid Meteor Shower in a dark location with a wide field-of-view, such as the Astropark in Sai Kung, could possibly reach 20-30 per hour during the best observation hours of between midnight and 5 am on December 14, while the number for an urban site can be no more than 1 per hour during the same period! This implies the severe light pollution in Hong Kong leads to a drop of over 50% of the actual number of meteors observable in most places, and over 90% in urban locations.

Tips for viewing the Meteor Shower:

On the usage of red light torches instead of normal torches, Dr So explains, “Strong lighting leads to light pollution and makes dimmer stars and meteors less visible. Red light is better because it won’t affect our night vision as much, giving us a better chance to see more meteors.” A red light torch can be easily prepared by covering a regular torch by layers of red cellophane, cloth or plastic bag.

“Be a responsible stargazer • Enjoy the meteor shower” Campaign
Both meteor showers and starry skies are valuable natural wonders, but they are slowly disappearing due to severe light pollution. Light pollution not only deprives us of the starry night skies, it also indicates a waste of electric energy and damages both the natural and living environment. It is therefore of utmost importance to reduce light pollution and protect our dark skies by proper usage of outdoor lighting.

To promote dark sky preservation, HKU Physics is launching the “Be a responsible stargazer • Enjoy the meteor shower” Campaign to encourage the adoption of proper stargazing manners, and to promote reducing light pollution. From now until January 31, 2018, members of the public can post photos of themselves enjoying the night sky with proper stargazing manners, or photos showing lighting fixtures which causes / reduces light pollution (with location) to Facebook with hashtags “#ResponsibleStargazer #MeteorShower”. The Campaign will select the best posts and showcase them during the Hong Kong Science Festival organized by the Hong Kong Science Museum in March 2018. This project is supported by the HKU Knowledge Exchange Fund.

For more about the “Be a responsible stargazer • Enjoy the meteor shower”Campaign, please go to http://nightsky.physics.hku.hk/KE/201718.