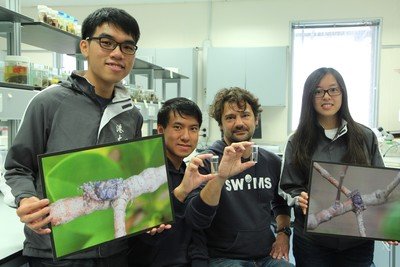 The Mangrove Ecology and Evolution Lab, led by Dr Stefano Cannicci at the Swire Institute of Marine Sciences (SWIMS) and HKU School of Biological Sciences, has recently discovered, described and named a new species of mangrove-climbing micro-crab from Hong Kong, Haberma tingkok, and published the description in Zookeys, a peer-reviewed and open access international journal dedicated to animal taxonomy. The new species has been given the scientific name of Haberma tingkok, since all the specimens found at present were spotted at a height of approximately 1.5 to 1.8 metres above chart datum, walking along the branches of the mangroves of the Ting Kok area. The crabs are small, less than a centimetre long, predominantly dark brown, with a squarish carapace, very long legs and orange claws. It represents the second endemic mangrove crab species described in Hong Kong. The previous one, Pseudosesarma patshuni, was described in 1975.

An adult male Haberma tingkok in its natural environment, the branches of mangrove tree Kandelia obovata. Note the long legs grasping the branch.

Discovery of a new endemic mangrove crab in over 40 years
This endemic tree-crab was previously unknown to science and it is only known, at present, to have come from Tolo Harbour, Hong Kong. It is Hong Kong’s first truly arboreal crab, i.e. living on the branches and canopies of mangroves and breathing air. Its closest relatives, i.e. crabs of the same genus, are only known to be found in the mangroves of Singapore and Indonesian New Guinea, but they are all normal crabs that live in the mud – they do not climb trees.

The first known individual of Haberma tingkok was found in the mangroves of Ting Kok at the end of last summer, during one of the routine biodiversity samplings carried out by a group of HKU undergraduate students majoring in Ecology & Biodiversity and research assistants. At the time, they were conducting a multi-institutional project funded by the Hong Kong Environment and Conservation Fund (ECF) “Assessing the Marine Biodiversity and Ecology of Tolo Harbour and Channel, with particular Reference to Coastal Marine Environments of Ting Kok and Shuen Wan Hoi - Phase I.” The Project is coordinated by the Director of SWIMS, Professor Gray A Williams, and managed by Dr Kevin Ho King-yan.

During the sampling, Mr Steven Wong Ho-tin, a year four undergraduate student majoring in Ecology and Biodiversity at HKU, found a mature, female crab of unusually small dimensions on the mangrove branches and showed it to Dr Cannicci, Associate Professor at the School of Biological Sciences, who immediately realised that the crab was not a common one in Hong Kong as it had some much-specialised features. Although the vast majority of crabs are marine and freshwater species, there are some groups that, along their evolutionary history, developed the uncommon ability to climb trees, especially in a mangrove habitat. This crab had the characteristics of a tree climber, extremely elongated legs, with respect to the body, which is very flattened, and she was carrying eggs, a clear indication that it had extreme confidence in living up in the branches of tress.

Since the identification of this group of crabs, i.e. the common mangrove crabs known as the Sesarmidae, can only be finalised by studying males, a large scale crab-hunt started, involving the whole group of students and researchers from HKU. It was Miss Cherry Cheung Cheuk-yiu, a research assistant at HKU, who finally spotted the first known male of this species. Under the microscope, in Dr Cannicci’s laboratory, it was clear that the crab was the first record of the crab genus Haberma in Hong Kong, since in this group the males have a peculiar locking-system on the second and third walking, probably for grasping females while mating. This new identification was confirmed by Dr Cannicci during a visit to the Lee Kong Chian Natural History Museum of the National University of Singapore and published by Dr Cannicci and Professor Peter Ng Kee-lin, Director of the Museum.

The discovery of this new crab species shows how little is known about the diversity of crabs in Hong Kong. On the basis of the number of known species from Japan and Taiwan, marine biologists from all over the world estimate that we only know up to 50-60% of the real diversity of coastal and littoral crabs in Hong Kong, which is far less than the ratio known for many other marine species. That is why the above-mentioned project on marine biodiversity in the Tolo Harbour area led by HKU and involving five other universities in Hong Kong is of paramount importance, and echoed the development of the Biodiversity Strategy Action Plan (BSAP) initiated by the Government of the Hong Kong Special Adminsitrative Region under the United Nations’ Convention of Biological Diversity.

Information on the project ‘Assessing the Marine Biodiversity and Ecology of Tolo Harbour adfnd Channel, with particular Reference to Coastal Marine Environments of Ting Kok and Shuen Wan Hoi - Phase I’ is available at https://www.tingkokproject.com/

About the HKU Mangrove Ecology and Evolution Laboratory
The recently established Mangrove Ecology and Evolution Laboratory (the Laboratory), based at the SWIMS is interested in various aspects of mangrove ecology and crab biology. The group aims to study the patterns of diversity of crabs and molluscs in Hong Kong, East African and South East Asian mangroves and their role in ecosystem functioning. There is a steady and alarming trend in decrease of mangrove forests all over the world and the SWIMS Mangrove Lab is deeply involved in their conservation, as members of the International Union for Conservation of Nature Mangrove Specialist Group. In particular, the group is involved in studying the impact of pollution and land reclamation on Hong Kong mangroves, and it will lead the two-year project “Hong Kong mangroves: where are they now?”, funded by the Hong Kong Environment and Conservation Fund and aiming at assessing the biodiversity and health of mangrove forests, for conservation and management purposes.

For more information and activities about the Laboratory, please visit https://stefanocannicci.wordpress.com/ 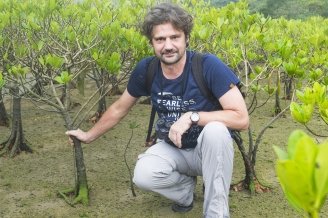 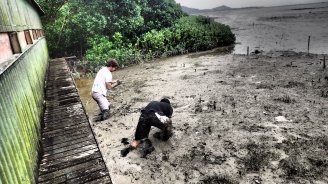 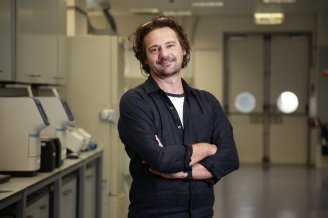 Dr Stefano Cannicci in the central facilty laboratory of the School of Biological Sciences, HKU, where he performs his analyses on the accumulation of heavy metals in the tissues of mangrove crabs 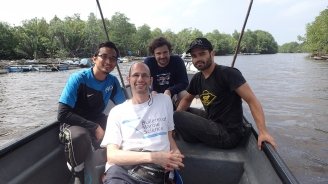 Dr Stefano Cannicci and his PhD student Pedro Juliao (left) ready for a sampling trip in the mangroves of Malaysia with Mohammad Nazrin Ishak (right) at Universiti Malaysia Terengganu, and Professor Farid Dahdouh-Guebas from Free University of Brussels