Each year, five outstanding women scientists – one per continent – are honoured for the contributions of their research, the strength of their commitments and their impact on society. This year, the For Women in Science Programme has a particularly strong resonance, placing women and chemistry at the heart of science today. Professor Yam is the laureate of the Asia/ Pacific region. Other winners include Professor Faiza Al-kharafi (Africa and Arab States),Professor Anne L’huillier(Europe), Professor Silvia Torres-Peimbert (Latin America), Professor Jillian Banfield (North America). The awards ceremony will take place on March 3, 2011 at UNESCO Headquarters in Paris. Each Laureate will receive US $100,000.

More than 1,000 high-level scientists from around the world were involved in the nomination of the Awards’ candidates, who come from five continents. The International Awards Jury, comprised of 16 eminent members of the scientific community, and presided by Professor Ahmed Zewail, recipient of the 1999 Nobel Prize in Chemistry, then selected the five women researchers in the Physical Sciences as the Laureates of the 2011 Awards. Their pioneering projects contribute to finding solutions to major challenges for our planet.

Professor Yam was born in Hong Kong, where she pursued her university studies, obtaining her PhD at The University of Hong Kong. After two years at City Polytechnic of Hong Kong, she moved to The University of Hong Kong in 1990 where she became Chair Professor in 1999. She was Head of Chemistry for 6 years from 2000 to 2005, and became the Philip Wong Wilson Wong Professor in Chemistry and Energy in 2009. She is an Academician of the Chinese Academy of Sciences, a Fellow of the Academy of Sciences for the Developing World, and has been awarded a Royal Society of Chemistry (UK) Centenary lectureship and medal. 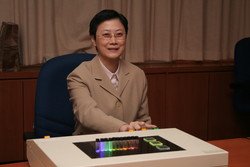