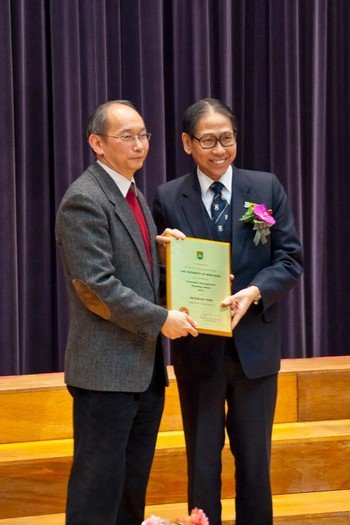 Dr Tsing has taught at the University of Hong Kong for 17 years and is described by his students as ‘kind’, ‘patient’, ‘caring’, ‘open’, ‘sincere’, and a ‘close friend’.

Dr Tsing’s passion for mathematics and his presentation of the subject as an intriguing field with many unsolved problems has inspired a similar excitement in his students and motivated many to pursue further research in the field. However, what distinguishes Dr Tsing as an outstanding teacher, beyond his passion for the subject matter, is his ability to understand and empathize with his students, to appreciate the conceptual difficulties that they encounter, and to help them overcome these difficulties.

One major influence on Dr Tsing’s beliefs as a teacher was the work My Freshman Year – What a Professor Learnt by Becoming a Student, a book by a US professor of anthropology writing under the pseudonym Rebekah Nathan. After 15 years of university teaching, Nathan spent her sabbatical year undertaking full-time study as a freshman in order to get a better understanding of the challenges faced by the students in the 21st century, which, she recognized, were very different from those that she had faced as a student. Inspired by Nathan’s reflections on this experience, Dr Tsing realized the importance of valuing students as individuals rather than ‘numbers in the class’, and began devoting his time to identifying and addressing the weak links in his students’ learning processes, as well as collecting mid-term feedback to help him fine-tune his teaching to suit their needs.

Whereas many professors might shy away from teaching first-year courses – which require not just a sound knowledge of the subject matter but also a broad knowledge base and a deep understanding of the needs of a diverse student group in order to make difficult concepts accessible and relevant to them – Dr Tsing has readily taken on this challenge. He has been highly successful both in developing first-year foundation courses for all science students and in making mathematics interesting and relevant to both science and non-science students in the Common Core courses and former Broadening Courses. His desire to nurture young minds extends also to secondary school students. For a number of years he has successfully run the Junior Science Institute (formerly the Summer Science Institute), which brings together emerging young scientists in schools and universities. Dr Tsing’s ‘infectious’ commitment and enthusiasm for teaching has inspired many colleagues, who recognize him as a living example of quality teaching.

At Faculty level, Dr Tsing assumed a leadership role as Associate Dean in 2007, and has, since then, played a key role in many of the new initiatives in the BSc curriculum reform. He has garnered support from his colleagues for initiating experiential learning as a graduation requirement for students in the Faculty of Science. Besides organizing learning in the workplace to enable better understanding of theoretical knowledge learnt in the classroom, Dr Tsing has also incorporated a number of opportunities for nurturing researchers. These include the Overseas Research Fellowship, which places students in research laboratories overseas; the Summer Research Fellowship, which allows undergraduates to participate in research projects undertaken by their professors; and the Undergraduate Research Colloquium, which strengthens students’ research capabilities by requiring them to present their final-year research projects in a symposium. These initiatives not only reflect the wider teaching-research nexus of a research-intensive university but also Dr Tsing’s personal belief in experiential learning as a powerful way of linking classroom learning with real-life research experience.

At University level, Dr Tsing’s participation in the Teaching and Learning Quality Committee and his substantial contribution to the Common Core Curriculum Committee have played a critical mediating role in the implementation of the new four-year curriculum. His candid advice, given from the perspective of the Faculty, has helped the University to fine-tune its curriculum reform policies and strategies. His willingness to listen to colleagues and students and his patience in explaining University policies have helped the Faculty to align with the strategic direction of the University. Dr Tsing’s colleagues and students are unanimous in their view of him as someone who believes in and practices leadership by working with people.

According to Chinese culture, the greatest respect that one can give to people one admires and seeks to emulate is to address them by the Chinese honorific laoshi [老師], which carries the meaning of ‘esteemed teacher’. Students – undergraduates and graduates alike – have used the honorific laoshi [老師] to address Dr Tsing, whether they have been taught by him or not. They have cited the definition of laoshi or ‘teacher’ given by Han Yu [韓愈] to describe him: “shi zhe suoyi chuan dao, shouye, jiehuo ye” [“師者所以傳道、授業、解惑也”]. That is, “a teacher is one who introduces the Way, imparts knowledge and resolves doubts.” Vincent, an undergraduate student, said, “Although he does not teach me in an official class [shouye, 授業], he teaches [me] through other channels, introducing the Way [chuan dao, 傳道], and resolving doubts [jiehuo, 解惑]. … He is my teacher for sure.” And Danny, who participated in the Summer Research Fellowship on two occasions and is now pursuing a research degree, stated, “I am proud to have him as my friend and teacher.”

This tribute paid by Cheuk Hon, a former undergraduate and MPhil student with Dr Tsing, is perhaps a fitting reflection on the high esteem in which he is held by his students: “Dr Tsing has taught me a lot … about matrix theory and its applications. But what moved me most was laoshi’s attitude towards life. … I have grown from an immature youngster to a Mathematics Panel Chair in a secondary school. I have applied all that I have learnt from Dr Tsing to my teaching. … I attribute my success in my teaching career to laoshi … His personal integrity, his scholarly disposition, his erudition, and his cultured outlook have been and will continue to be a source of inspiration for the rest of my life.”