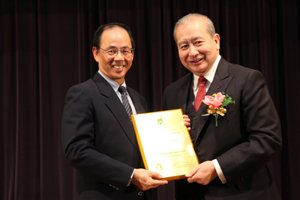 Professor Chan has been a university teacher for twenty-five years, fifteen of which he has spent at the University of Hong Kong. He is well-known amongst colleagues and students for his dedication to the University's core mission of teaching and learning, and his commitment to the whole-person development of his students. In 2004, he was awarded the University Teaching Fellowship in recognition of his teaching excellence ¾ and phrases such as "inspiring, interactive, humorous, encourages us to think critically" are most often used by his students to describe his teaching. His passion for teaching and his true sense of responsibility towards his students were inspired by his PhD supervisor at University of California, Berkeley ¾ a man who treated the young Chan Lung Sang and his fellow students as if they were a part of his family, encouraging and supporting their learning and personal growth. He recalls that one day, on a field trip in Italy, he said to his supervisor, "You have done so much for me ¾ how can I ever repay you?" And his supervisor's answer was "Just treat your own students in the future the way I have treated you."

Clearly, Lung has followed this advice. Believing that good teaching starts with a passion for students, and that the role of a teacher extends beyond the classroom, he describes his relationship with the young people he teaches as a learning partnership and a working partnership. As testament to his commitment, his students seek advice from him even many years after they graduate. And, as he remarks with a smile, he is 'invited to a lot of weddings' this year alone he is attending seven.

At Faculty level, Lung has played an important role in the development of the Earth Sciences curriculum in the Faculty of Science since the Department of Earth Sciences was first set up in 1995, the first and still the only department of its kind in Hong Kong. Being able to develop a Department of Earth Sciences in Hong Kong, so that the city could produce its own specialists and no longer have to rely solely on overseas consultants, was a dream that Lung had first had when he was teaching at the University of Wisconsin-Eau Claire. Being able to fulfil this dream has given him great excitement and satisfaction. Moreover, Lung has also played a leadership role in redesigning the admission policy for the Science Faculty and restructuring the Science curriculum with an emphasis on the First Year Experience and Experiential Learning, with the goal of fostering a holistic learning experience for the students.

At University level, Lung has made a significant contribution to the four-year Undergraduate Curriculum Reform. He has done this both through his membership in the Steering Committee, which oversees the planning and implementation of the new curriculum, and by taking a leadership role in the Scientific and Technological Literacy Area of Inquiry of the Common Core Curriculum, since its inception in 2007. He has also played an important role in the development of the conceptual framework, the promotion of the goals of the Common Core Curriculum, and the facilitation of inter-Faculty and inter-disciplinary collaboration.

The impact of Lung's dedicated work extends beyond teaching and learning at the University. As a true believer of experiential learning, he has developed a distinctive approach to teaching, which he has coined 'problem-based learning in the field'. In the past few years, he has inspired numerous school teachers and students to adopt this approach through seminars and workshops. His impact on teaching in schools is best summarized by this comment from a Geography school teacher: "'PBL in the field'not only benefited my students but also broadened my horizoand offered me invaluable experiences and guidance to make a pedagogical shift in this era of education reform."

His leadership in teaching and learning, both at the Faculty and University level, and the significant impact his pedagogical approach has had on school teachers and students, mark Professor Chan Lung Sang as a teacher of rare exception.