"Exploring the Combined Role of Eustasy and Oceanic Island Thermal Subsidence in Shaping Biodiversity on the Galápagos", Journal of Biogeography, 2014, 41(7): 1227–1241,

The Galápagos chain in the eastern Pacific displays striking patterns in the distribution and composition of land animals across its islands. This research set out to explore the possible impacts of significant geographical changes on terrestrial fauna by constructing a series of high resolution models. The investigations show that over the past half-million years, major shifts in sea level, caused by climatic and geological processes, have regularly reconfigured the archipelago’s geography. Land bridges between the islands surfaced periodically, allowing animal populations to access newly exposed terrain and reconsolidate their gene pools. The research has attracted international media attention, and Dr Ali was invited to talk at the Royal Geographical Society in London in October 2014. 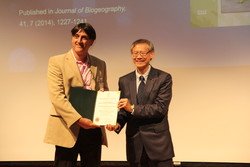