The major accomplishments in Professor Li’s research programme include the development of several original methods for protein chemical synthesis, peptide cyclization and protein modifications, including Ser/Thr ligation, P-B peptide desulfurization and phthalimidine protein bioconjugation. Furthermore, his group has been working on the synthesis and medicinal chemistry studies of complex antibacterial cyclic peptides, with completion of the total synthesis of daptomycin and teixobactin.

Professor Li received his PhD from Harvard University, USA in 2007. After postdoctoral work at the Memorial Sloan Kettering Cancer Center in New York, he joined the Department of Chemistry at The University of Hong Kong as an Assistant Professor in 2009, and was promoted to Associate Professor in 2014 and Professor in 2018. He was also the recipient of Wuxi PharmaTech Life Science and Chemistry-Scholar Award (2014), Distinguished Faculty Award by Chinese-American Chemistry & Chemical Biology Professor Association (CAPA) (2016), Croucher Senior Research Fellowship (2017) and Outstanding Research Award by the University of Hong Kong (2018).

Congratulations to Professor Li for his accomplishments. 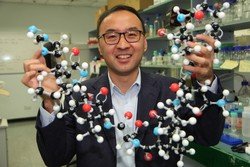