Professor Guochun Zhao from the Department of Earth Sciences has just been elected a Member of the Chinese Academy of Sciences (CAS). The Academy announced today (Nov 22, 2019) a list of 64 Members and 20 Foreign Members elected for 2019. Of the 11 Members under the Geographic Science Section, Professor Zhao is the only academic from Hong Kong bestowed with the honour, in recognition of his contribution in the research of metamorphic petrology, Precambrian geology and supercontinents.

CAS Member is a lifelong honour and the highest academic title in China, given to scientists who have made significant achievements in various fields.

Professor Zhao is delighted to be recognised with this honour. “I am very honoured to have been elected as the Member of the Chinese Academy of Sciences (Geographic Science Section), which reflects not only the recognition of my academic achievements in earth sciences, but also an acknowledgement of my significant contributions to the development of earth sciences in Hong Kong and in Mainland China. I would like to thank HKU, Northwest University (Xi’an), Hong Kong RGC and China NSFC for their long-term financial supports for my research, and I would also like to thank my collaborators and my research group who have worked hard together with me for many years,” said Professor Zhao.

HKU President Professor Xiang Zhang congratulated Professor Zhao on his being elected as a Member of the Chinese Academy of Sciences. Professor Zhang said: “I am delighted to see Professor Zhao receive yet another national accolade in recognition of his distinguished achievements in the field, and his election to the CAS will continue to strengthen HKU’s national and international research standing. The University is very proud of his accomplishments, and his HKU colleagues join me in offering him our warmest congratulations on this prestigious achievement.”

Dean of Science Professor Matthew Evans also gives full recognition to the accomplishments of Professor Zhao. “Being elected to the CAS is the highest honour and mark of esteem that can be bestowed on a Chinese scientist, the Faculty is immensely pleased to see Professor Zhao being recognised in this way. It is a testament to the excellence of his work over a sustained period of time that has got him to this point. We are very pleased to have four members of CAS on the Faculty’s staff now,” said Professor Evans.

Professor Guochun Zhao was born in Xiuyan County, Liaoning Province in 1961. He was a graduate of Xiuyan Advanced High School in 1981 and obtained his BSc and MSc degrees from Changchun University of Earth Sciences (now merged into Jilin University) in 1985 and 1988, respectively, and his PhD degree from Curtin University (Australia) in 2000. He is a full-time professor of Earth Sciences at HKU and a Changjiang Scholar professor (short-term) in the Department of Geology of Northwest University (Xi’an). Professor Zhao’s main research fields are metamorphic petrology, Precambrian geology and supercontinents. His major research achievements are discoveries of two 1.95-1.85 billion years old continental collisional belts in North China, recognition of global-scale 2.0-1.8 Ga collisional events leading to the assembly of a supercontinent and a new reconstruction of East Asian continental clocks in Pangea. According to ISI Web of Knowledge, Professor Zhao’s record in the field of Geosciences includes 320 papers cited for more than 33,000 times (h-index = 107), ranking number 15 among 3,739 top 1% geoscientists. Professor Zhao has been received many awards, prizes and honors, incluidng State Natural Science Award (Second Class; First Awardee) (2014), Fellow of Geological Society of America (GSA) (2014), Highly Cited Researcher Award of Thomson Reuters (2014-2018), Outstanding Researcher Award of the University of Hong Kong (2016), 29th Khwarizmi International Award (First Class; 2016), Chair Professorship of Cheung Kong (Changjiang) Scholars Program (2017), Thousand Talents Plan (Short Term) (2017) and TWAS Prize in Earth, Astronomy and Space Sciences from The World Academy of Science (2018). Professor Zhao is the Editor-in-Chief of Precambrian Research, a leading international journal in earth sciences.

About Chinese Academy of Sciences 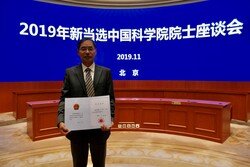