Top-notch scholar Professor Ngai-Ming MOK, Edmund and Peggy Tse Professor in Mathematics and Chair of Mathematics at The University of Hong Kong (HKU), was awarded the 2022 Future Science Prize – Mathematics and Computer Science, in recognition of his exceptional contributions to promoting the development of mathematics and computer science related basic research in the Greater China region.

While originality and the long-term significance of the award-winning work are the  key criterion for selection, the Prize also recognises the enormous impacts of the awarded research worldwide. The award presentation ceremony will be held by the end of the year, where recipients of the three categories will be honoured and granted US$ one million each to support the continuous development of their research.

Professor Mok is deeply honoured to receive the award. “I feel indebted to the Future Science Foundation for their recognition of the value of fundamental research in mathematics towards progress in science.  I feel very much honoured to have made my contributions in mathematical research, together with my many collaborators and those who have taught me and inspired me, through an integrated approach to problem solving in mathematics cross-fertilising ideas from complex analysis, differential geometry, algebraic geometry and number theory.  With the award of the Future Science Prize I wish also to motivate the very many students and researchers in mathematics.  The search for beauty and benevolence that binds truth-seekers in mathematics across generations will continue to enable the flourishing of mathematics and its innumerable applications to scientific development,” said Professor Mok.

Professor Xiang ZHANG, President and Vice-Chancellor of HKU, said, “I offer my heartfelt congratulations to Professor Mok. Our world-class scholars have consistently produced impactful research at the local and international levels, answering fundamental questions and opening avenues for new knowledge. This landmark accolade is not only a recognition of Professor Mok’s scholarly breakthrough in basic research, it is also a testament to the University’s dedication to elevating our research excellence, and further evidence of our impact and research standing in the world.”

Dean of HKU Science (Interim) Professor Vivian Wing Wah YAM congratulated Professor Mok on his well-deserved success. "It is truly gratifying to learn that Professor Mok has taken his research accomplishments to new heights. His dedication, perseverance and never-diminishing passion for cutting-edge mathematics research have truly inspired our young scholars and future researchers. Accolades and reputation would not make him complacent. Professor Mok has continued to solve challenging mathematical problems and strive for excellence. He always stays focused on fundamental research in algebraic and complex differential geometry at the frontiers, opening avenues for discussion about novel approaches for the research area,” said Professor Yam.

Professor Mok is a renowned mathematician specialising in Several Complex Variables, Complex Differential Geometry and Algebraic Geometry. He is well-known in the mathematical community for his global perspective in Pure Mathematics and for having solved a series of important conjectures and problems using a combination of analytic, algebraic and geometric methods. Professor Mok has received many distinctions and awards, including the Bergman Prize of the American Mathematical Society, USA in 2009 and the Chern Prize presented by International Consortium of Chinese Mathematicians (ICCM) in 2022. He was elected a member of the Chinese Academy of Sciences and the Hong Kong Academy of Sciences in 2015 and 2017 respectively.

Established in 2016 by a group of scientists and entrepreneurs, the Future Science Prize is to reward scientists who have made outstanding research achievements in our society, enlightening the spirit of science and promoting the development of innovative science among the next generation across China and the world. The Prize consists of three categories: Life Science, Physical Science and Mathematics and Computer Science. The award is nominated by invitation only and professionally evaluated by the Scientific Committee composed of outstanding scientists, upholding the principles of fairness, impartiality and trust. For more information, please visit here.

Professor Mok was a graduate of St. Paul's Co-educational College in 1975. He obtained his PhD at Stanford University in 1980 and embarked on his teaching and research career at Princeton University. Subsequently, he was Professor at Columbia University and University of Paris, before returning to Hong Kong in 1994 to take up a Chaired Professorship in the Department of Mathematics at HKU.

Professor Mok is recognised worldwide for his research achievements. The prestigious awards he received include the Sloan Fellowship Award (US), Presidential Young Investigator Award (US), Croucher Award 1998 (Hong Kong), State Natural Science Award (Class II) 2007 (China), the Bergman Prize of the American Mathematical Society 2009, and the Chern Prize of the ICCM 2022. Professor Mok served on the Editorial Board of Inventiones Mathematicae from 2002 to 2014. He served as a member of the Fields Medal Committee for the world's prestigious International Congress of Mathematicians (ICM) in 2010, and was a core member for the subject panels of Algebraic and Complex Geometry in ICM 2006, and in Analysis and its Applications in ICM 2014. As Director of the Institute of Mathematical Research at HKU, Professor Mok also strives to provide a platform where researchers in Mathematics can freely exchange their research ideas, and create an ambiance that facilitates cross-fertilisation between different fields of Mathematics. He was elected a Member of the Chinese Academy of Sciences (Mathematics and Physics) in 2015, and later a Member of the Hong Kong Academy of Sciences in 2017. 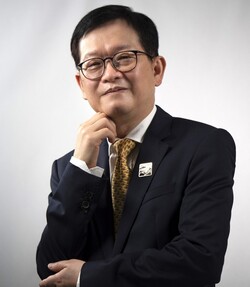