Congratulations to Professor Mok Ngai Ming, Edmund and Peggy Tse Professor in Mathematics and Chair of Mathematics, for being elected as a member of The Academy of Sciences of Hong Kong.

Professor Mok is a renowned mathematician specialising in Complex Differential Geometry, Several Complex Variables and Algebraic Geometry. He is well-known in the mathematical community for his global perspective in Pure Mathematics and for having solved a series of important conjectures and problems using a combination of analytic, algebraic and geometric methods. Professor Mok has received many distinctions and awards, including the Bergman Prize of the American Mathematical Society, USA in 2009 and was elected member of the Chinese Academy of Sciences in 2015.

In response to the news, Professor MOK said “I feel very much honoured to have been elected to the Academy of Sciences of Hong Kong. To be able to serve humankind in a discipline which is my favourite subject since childhood has always been my dream. I have been fascinated by the beauty of the subject which was transmitted to me by passionate teachers from both primary school and secondary school in Hong Kong, and I am proud to have grown up intellectually from that tradition." 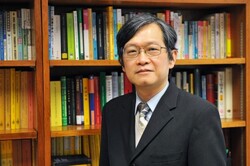