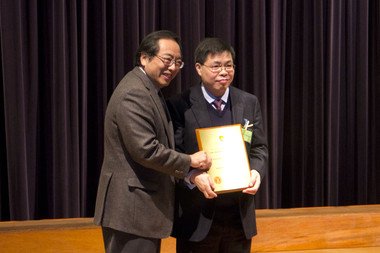 Professor Zang received the University Outstanding Researcher Award 2011 for his exceptional research achievements of international merit, supported by documented evidence of the quality and quantity of candidates' research publications, and his involvement in high-impact applied research work.

Professor Zang is also one of the winners of Research Output Prize for Faculty of Science, for his research paper entitled “A Unified Approach to Box-Mengerian Hypergraphs” in Mathematics of Operations Research Vol. 35, No. 3 (August 2010), 655-668. Other authors include Xujin Chen and Zhibin Chen.

Professor ZANG obtained his PhD from Rutgers University in 1995, and joined the University of Hong Kong in 1996. His research covers a wide spectrum of combinatorics and optimisation. Over the years, he has successfully resolved several prominent longstanding open problems, such as the Three-Colour Conjecture, which is a counterpart of the well-known Four-Colour Theorem. He has systematically developed the theory of polyhedral combinatorics, and discovered (with his collaborators) some powerful and novel combinatorial methods for tackling various important optimisation problems. Professor Zang has published extensively in flagship journals in the fields of operations research, computer science, and discrete mathematics. One of his papers received the best paper prize at the 2005 International Computing and Combinatorics Conference; another paper was selected as an outstanding research achievement by the Academy of Mathematics and Systems Science, Chinese Academy of Sciences; and a third was the sole subject of discussion in the plenary address by András Sebő, a famous Hungarian mathematician, at an international conference. He currently serves on the editorial boards of five international journals, including the prestigious Operations Research and Discrete Applied Mathematics.

The great mathematician, Henri Poincaré, once said, “Mathematical discoveries, small or great, are never born of spontaneous generation. They always presuppose a soil seeded with preliminary knowledge and well prepared by labour, both conscious and subconscious.” Professor Zang has full conviction in this quotation, and hence always studies mathematics with passion, ambition, dedication, and assiduity.