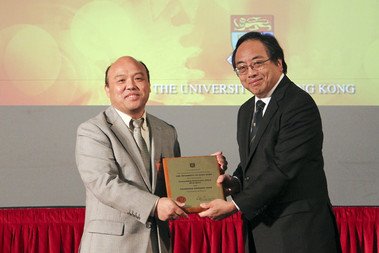 Professor Shen graduated in theoretical physics from Fudan University, and received his PhD in 1992. He worked in Germany and Japan before joining the University of Hong Kong in 1997, where he is currently Professor of Physics. He was granted an Alexander von Humboldt fellowship (Germany) in 1993, and a Senior Croucher Research Fellowship (The Croucher Award) in 2010.

His research field is condensed matter physics, focussing on understanding the electrical and magnetic properties of materials at the level of electrons, and exploring novel materials and possible application in the next generation of electronic devices. He has published over 160 papers in international journals, which cover quantum magnetism, superconductivity, spintronics of semiconductors, and novel quantum states of matter. Recently he has been studying a new field as a synergy of topology, physics and material science, and proposed a unified theory to describe the topological materials in various forms. His relevant research results were summarised in his single-authored monograph, Topological Insulators (Springer Series in Solid-State Sciences, 174, 2012), the first such publication on this frontier topic.

Professor Shen will continue his pursuit of simplicity and harmony in physical laws, and he hopes his research will enrich our knowledge of novel quantum phenomena and materials.