Professor Mok's nomination by several academicians of the Chinese Academy of Sciences for the Award symbolizes a recognition for his significant contributions to the development of Mathematics in China in the past three decades. As early as 1980 Professor Mok was invited by the Chinese Academy of Sciences to lecture for one month on the subject of Complex Geometry. This was followed by a number of very fruitful collaborations with outstanding mathematicians from Mainland China. In 1989, Professor Mok published two articles in the flagship journal Annals of Mathematics. One of the articles, co-authored with the late Professor Jiaqing Zhong of the Chinese Academy of Sciences, was the first article (co-)authored by a Mainland mathematician to appear in Annals of Mathematics since China opened up to the world in the late seventies.

Professor Mok is delighted to have received the Award. "I am glad to see that China is attaching great importance to the Basic Sciences, and I am honoured to be able to contribute at a moment when China is making great efforts to develop the Sciences through innovation. Mathematics is of fundamental importance to the development of the Natural Sciences. Through innovations and discoveries in Mathematics, I hope to continue making contributions to the advancement of China's scientific research," he said. 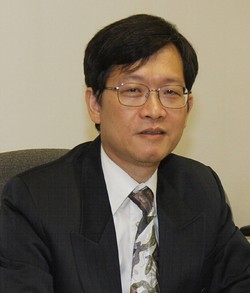