Professor N Mok, Edmund and Peggy Tse Professor in Mathematics, was awarded the 2009 Bergman Prize by the American Mathematical Society, for his fundamental contributions in Several Complex Variables and, in particular, in the geometry of Kahler and algebraic manifolds, and also for his work on the rigidity of irreducible Hermitian symmetric spaces of compact type under Kahler deformation, using both analytic and algebraic methods.

Established in 1988, the prize recognizes mathematical accomplishments in the areas of research in which the late Professor Stefan Bergman worked.  Professor Bergman was Professor at Stanford University 1952-1977 and a key figure in Several Complex Variables in the twentieth century.

Professor Mok specializes in Complex Differential Geometry, Several Complex Variables and Algebraic Geometry. His research interests cover a broad range of subject areas and he has published over 80 research articles, including 10 in the flagship journals Annals of Mathematics and Inventiones Mathematicae.

After completing his secondary school education at St. Paul’s Co-educational College in 1975, Professor Ngaiming Mok pursued undergraduate studies at the University of Chicago.  He then furthered his studies at Yale University, where he obtained his Master of Arts degree in 1978, and completed his Doctorate degree at Stanford University in 1980.  Professor Mok began his career in Mathematics at Princeton University.  He later went on to become a professor at Columbia University and Université de Paris (Orsay) before returning to Hong Kong in 1994 to be the Chair Professor in Mathematics at The University of Hong Kong.  Since 1999, Professor Mok has also been the Director of the Institute of Mathematical Research.  Professor Mok has been serving on Editorial Boards of a number of mathematical journals including Inventiones Mathematicae and another top journal Mathematische Annalen.  He was an Invited Speaker at the International Congress of Mathematicians in Zurich (ICM 1994) and served as a Core Member on the Panel for Algebraic and Complex Geometry for ICM 2006 in Madrid.  He was a member of the Fields Medal Committee for ICM 2010.  Among the professional accolades Professor Mok had received are the Alfred Sloan Fellowship in 1984, the Presidential Young Investigator Award of the United States in 1985, the Croucher Senior Fellowship Award in 1998 and the State Natural Science Award of China in 2007. 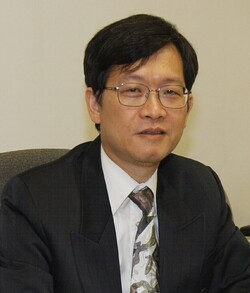