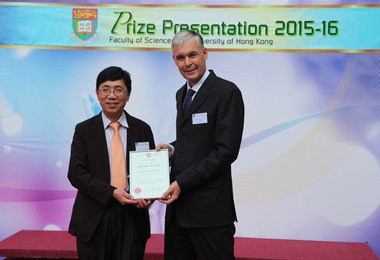 Professor Che Chi Ming is one of the pioneers in the field of phosphorescent organic light-emitting diode (OLED) materials. Together with Dr Ma of Jilin University, Professor Chepublished the first paper in this field in 1998.Over the years, Professor Che has been actively involved in the development of new patentable phosphorescent platinum(II) complexes for practical organic displays and lighting technology. More than twelve patents have been filed to protect his inventions. Most of the patents were licensed to Mainland or International companies. As examples, seven patents were licensed to Beijing Aglaia Technology Development Company Limited (Aglaia) and one was licensed to Merck. Last year, three patents were licensed to the world largest OLED manufacture company – Samsung. Samsung is collaborating with Professor Che to fine tune those systems aiming to use phosphorescent platinum(II) material(s) to replace UDC owned the iridium(III) material(s). Professor Che is also working with Agiala and Truly International Holding Limited (Truly, a display panel manufacturer) to identify suitable material(s) for manufacturing OLED in Truly’s production line.