Five of our young talented researchers at the Faculty have achieved outstanding results in the National Excellent Young Scientists Fund (Hong Kong and Macau) for 2021, a prestigious fund under the National Natural Science Foundation of China of the Ministry of Science and Technology (MOST).

This has been the third consecutive year for HKU to be awarded the highest number of projects among its peer institutions, after the fund was extended to Hong Kong and Macau for applications by eight designated universities since 2019.

Professor Vivian YAM, Dean of Science (Interim) and Philip Wong Wilson Wong Professor in Chemistry and Energy, expressed her heartfelt congratulations to the awardees for their achievements: “It is always encouraging to learn of the success of our junior faculties in establishing their research path and gaining recognition in the academic arena, through their diligence and perseverance in pursuit of research excellence. This honour is not only an accolade in recognition of their accomplishments in respective fields, but also a testament of the Faculty’s impact and research standing across the territory.”

The five young scientists and their award-winning projects:

Dr Lee is a nuclear physics experimentalist aiming to investigate the novel structure of extremely exotic nuclei with radioactive isotope beams and construct a new-generation detection array for high-precision measurements.  This project employs their state-of-the-art arrays to explore A) isospin symmetry breaking via precise β-decay spectroscopy of 23Si at HIRFL of Institute of Modern Physics (China), B) new magicity in 100Sn via in-beam gamma spectroscopy of 100Sn at RIKEN (Japan), guiding towards comprehensive and even beyond the traditional understanding of nuclear forces.

Dr Dai has obtained significant progress towards the understanding of tidal disruption event (TDE) physics.  Based on the established foundational work, she will continue to push the development of the TDE field.  She will also link her work to studying other black hole accreting astronomical systems and the co-evolution of massive black holes and galaxies.

Based on the molecular design and synthetic chemistry, Dr Liu has been committed to the atomically precise synthesis of nanographenes (polycyclic aromatic hydrocarbons, abbreviated as PAHs) and the study of their physical and chemical properties.

In this project, Dr Zheng plans to continue using the touch circuit as a model to study the molecular mechanisms of synaptogenesis, the decision between chemical and electrical synapses, the “innexin code” underlying the specificity of gap junctions, and the process of circuit remodelling during development. Expected results from this project can have profound impacts on our understanding of how neuronal networks are established and how the nervous system develops.

This project will help address the urgent global issue of insect declines, as well as broaden our understanding of how ecosystems and their functions are changing under climate change.

The National Excellent Young Scientists Fund is granted annually to support young male scientists under the age of 38 and young female scientists under the age of 40 who have attained outstanding achievements in research, to further expand in areas of their own choice. The Fund is highly competitive, with only 25 projects in total funded across Hong Kong and Macau this year. Each project will receive a funding of RMB1.6 million over a maximum period of three years, in the form of cross-border remittance to directly support the researchers' work in Hong Kong or Macau. 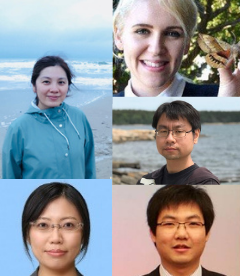